400 years ago, our ancestors were stolen from Africa and endured months chained head to toe in the shithole of slave ships. Today, we are commandeering a luxury cruise line and headlining the on-board entertainment for our inaugural WE OWE US Cruise to Puerto Rico.

Donald Trump’s seething hatred of black and brown people has brought White Nationalism to the forefront of the Republican Party’s platform. Trump and his White Nationalist Republican cronies believe all non-white majority countries are “shitholes”.
Donald Trump has refused humanitarian aid to Puerto Ricans who’s lives were destroyed by Hurricane Maria and the Pandemic. He claims Puerto Ricans are not Americans and considered selling Puerto Rico. It is yet another example of how Donald Trump views black and brown people. We are here to fight against Donald Trumps overt racism, and his enablers who vote Republican. White Nationalism is a scourge that must be eliminated.
As climate change increases the frequency and intensity of hurricanes, we must look at why America has been doing nothing to prevent a further deterioration. Environmental racism has been a problem throughout American history. American companies, backed by the government, have went into countries inhabited by primarily black and brown people in order to rape the land and steal the natural resources. American power has been built on the suffering of non- white people since its inception.
America refuses to reduce it’s carbon footprint, even though climate change is happening rapidly. The first places who will be effected by climate change are majority non-white, the Caribbean Islands will face increasingly intense hurricanes on a regular basis, African and Middle Eastern countries will face epidemic levels of water shortages—all the while, white America will again profit from the suffering of others. Yet the DNC has repeatedly refused to stage a Presidential debate on the issue. Yet again, the Democratic Party has continued to perpetuate the system environmental racism that infects America.
Millions of people in the Caribbean are living under the threat of a category 5 hurricane, Travel in Peace Nation will take the lead in restoring the tourism ecosystems of Caribbean Islands decimated by climate change induced hurricanes. TIP Nation will begin a series of Humanity First Cruises to bring tourism dollars to devastated economies.
After Joe Biden is elected President, TIP Political Party will propose the establishment of a Climate Change Force operated by the US Military, this Force will replace the ineffective FEMA. When a hurricane is eminent, we will deploy resources to evacuate as many people out of harms way as we can. We will also propose establishing an International Refugee Basic Income Fund. The G7 countries–countries who gained their wealth through slavery and colonization will be asked to contribute to the fund as a form of reparations. This will help people to be able to stay in their homes, it will prevent a mass exodus from environmentally devastated countries, and it will improve the safety of these economically devastated countries.

On the WE OWE US First Cruise you will meet the architects of Tipnation.NYC and the TIP Political Party—as well as our preferred progressive candidates. You will also have the opportunity to strategize with other like-minded progressives in our attempt to modernize the Democratic Party. We are in the midst of a war—a war to save the very soul of the United States of America.

Since the days of the Monroe Doctrine, the United States has interfered with the inner workings of various countries in the Western Hemisphere. TIP wants to stop US bullying and, instead, use tourism to help Puerto Ricans and various Caribbean countries improve their economy and quality of life.

To support Joe Biden or provide onboard entertainment, please contact us at Tip@tipnation.org. 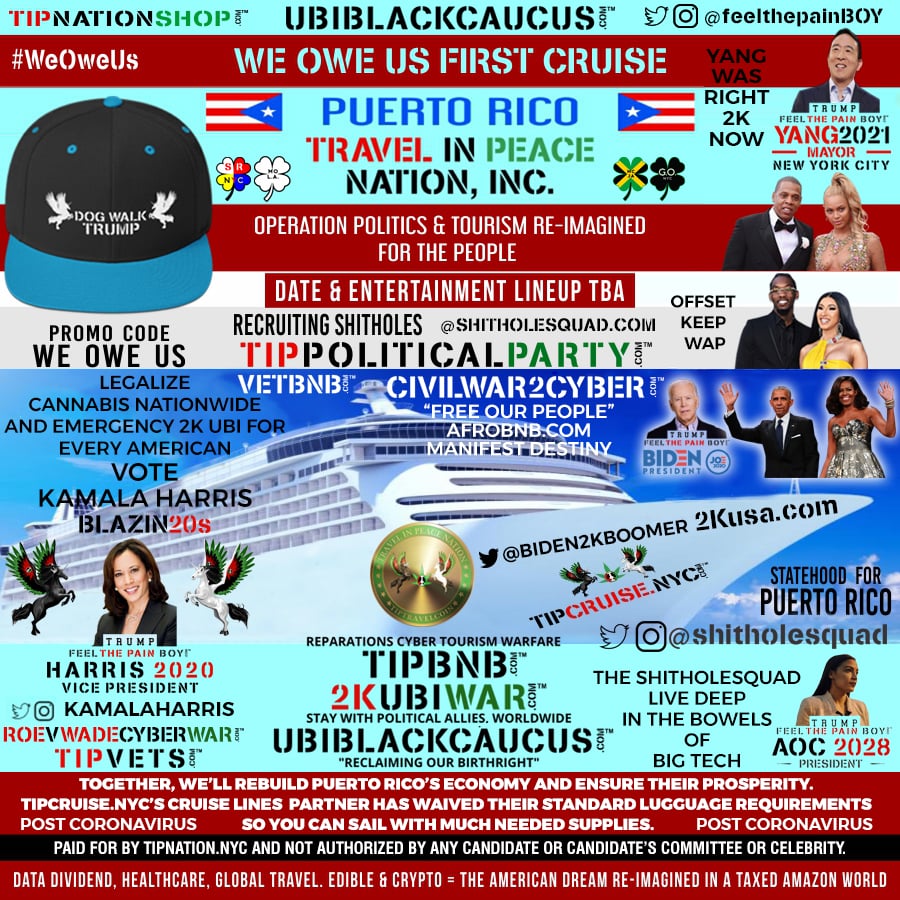 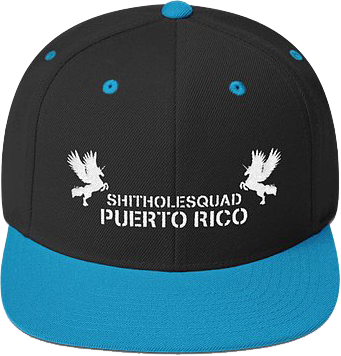 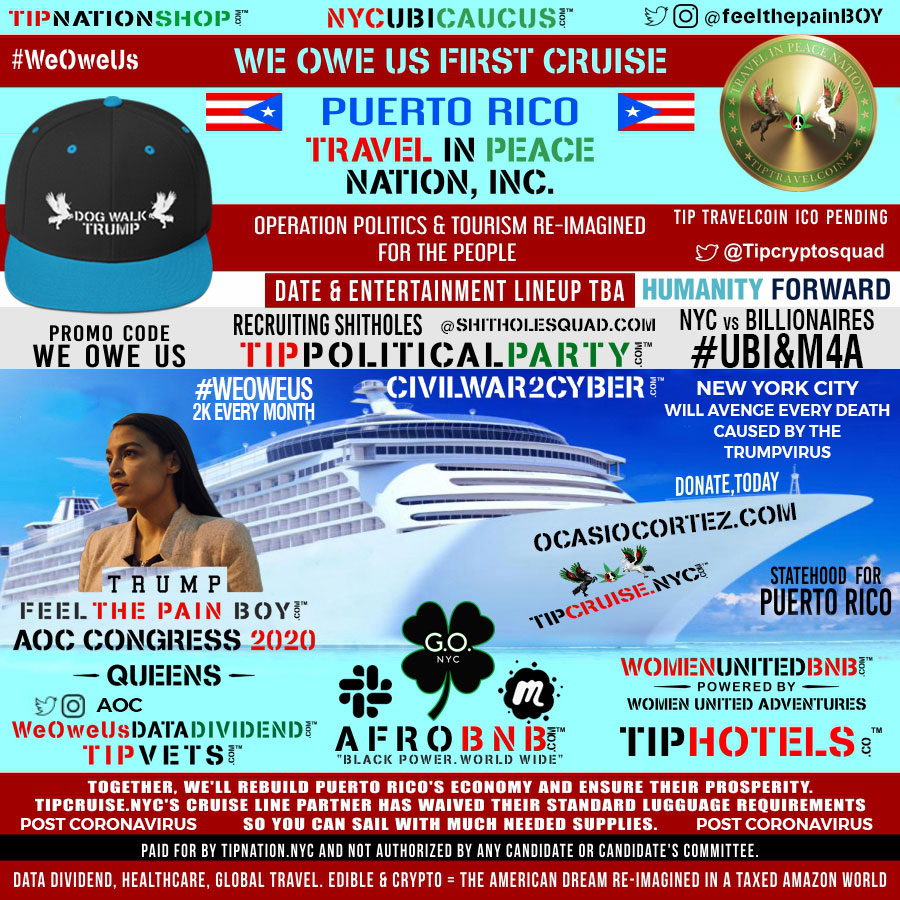 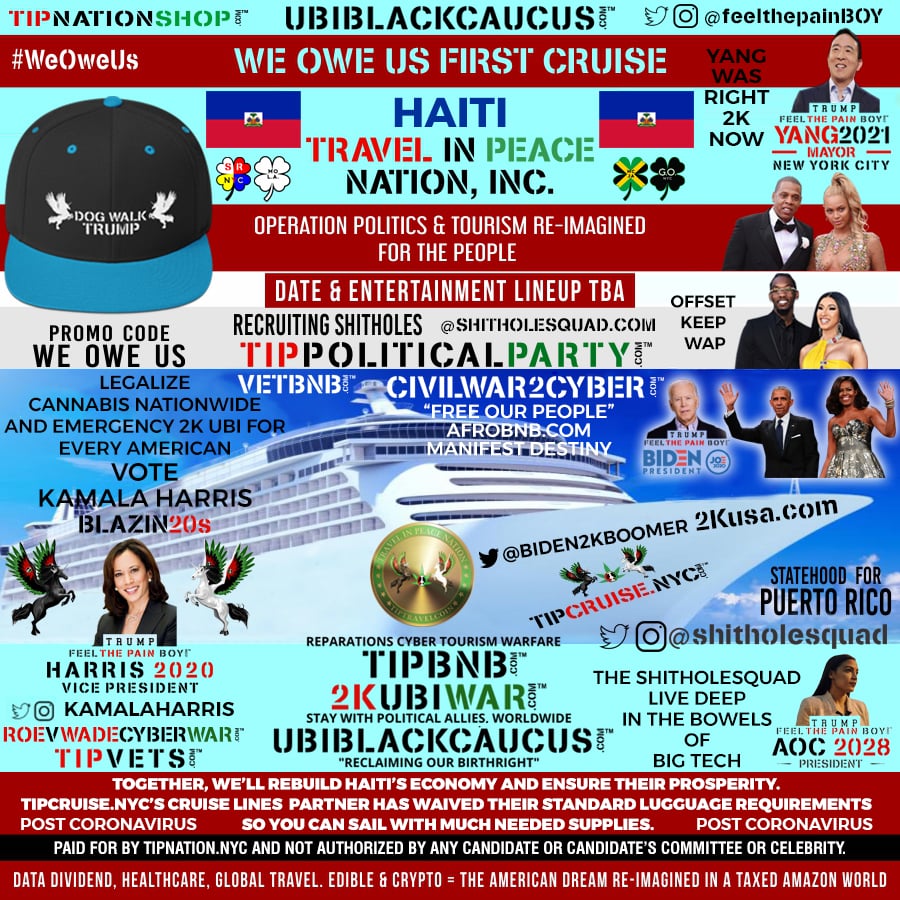 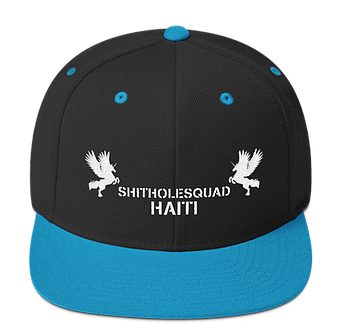 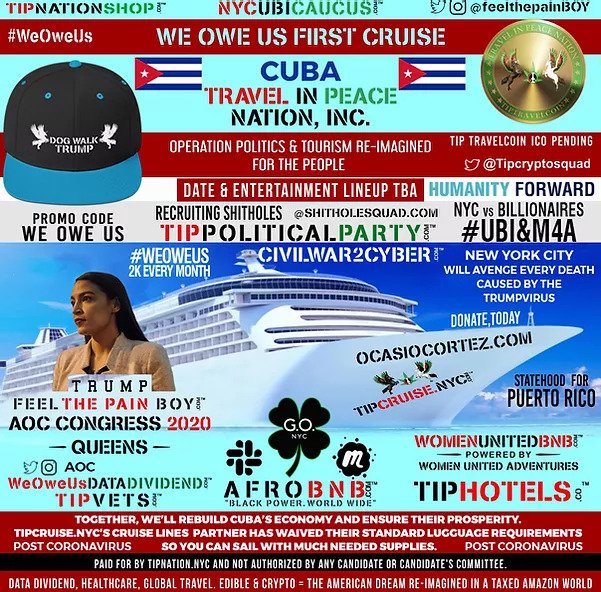 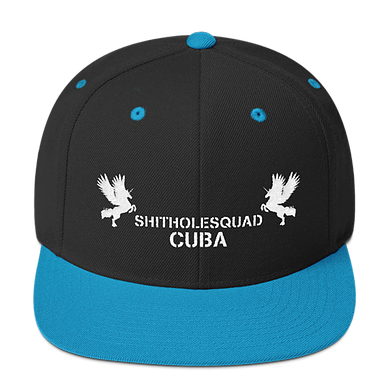 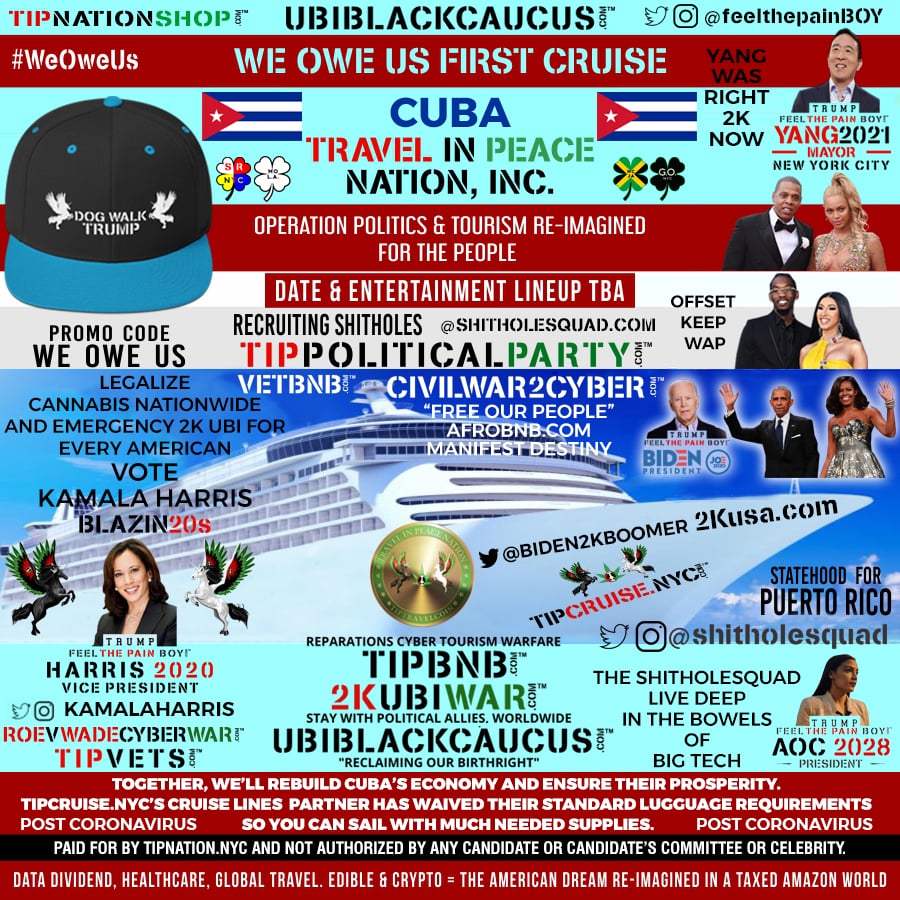 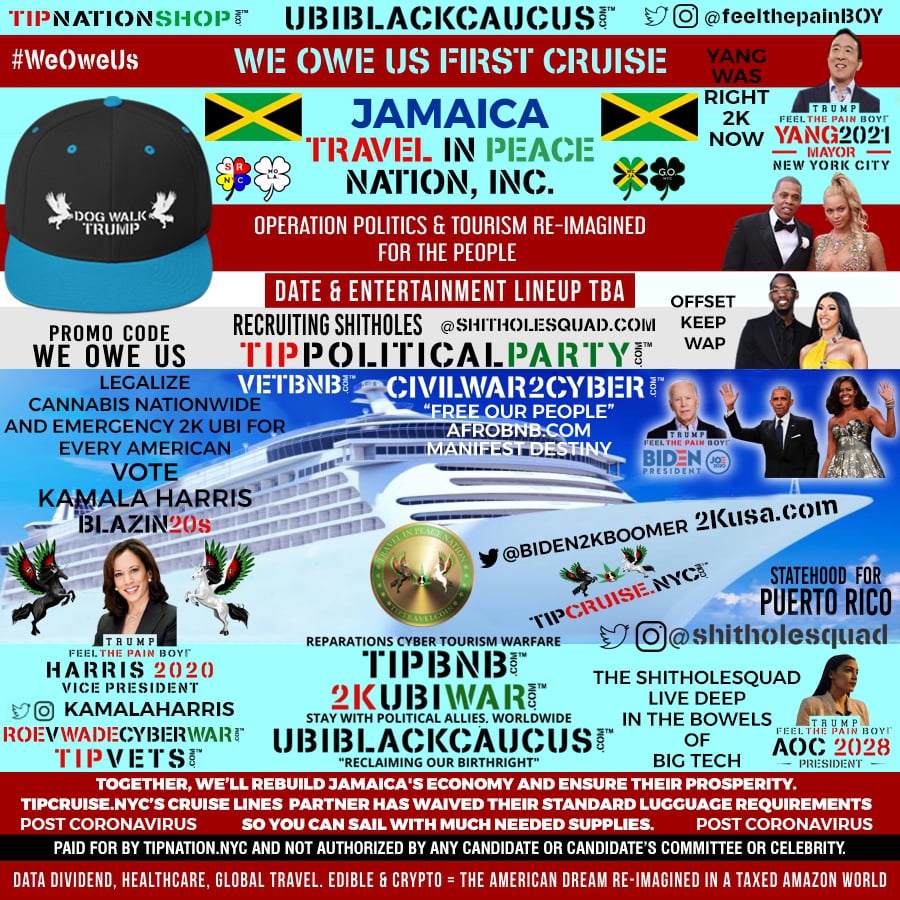 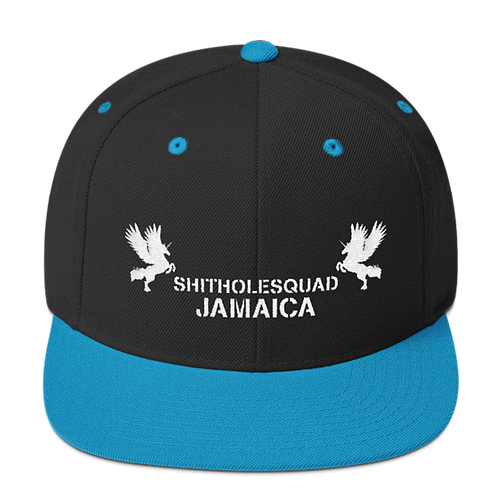 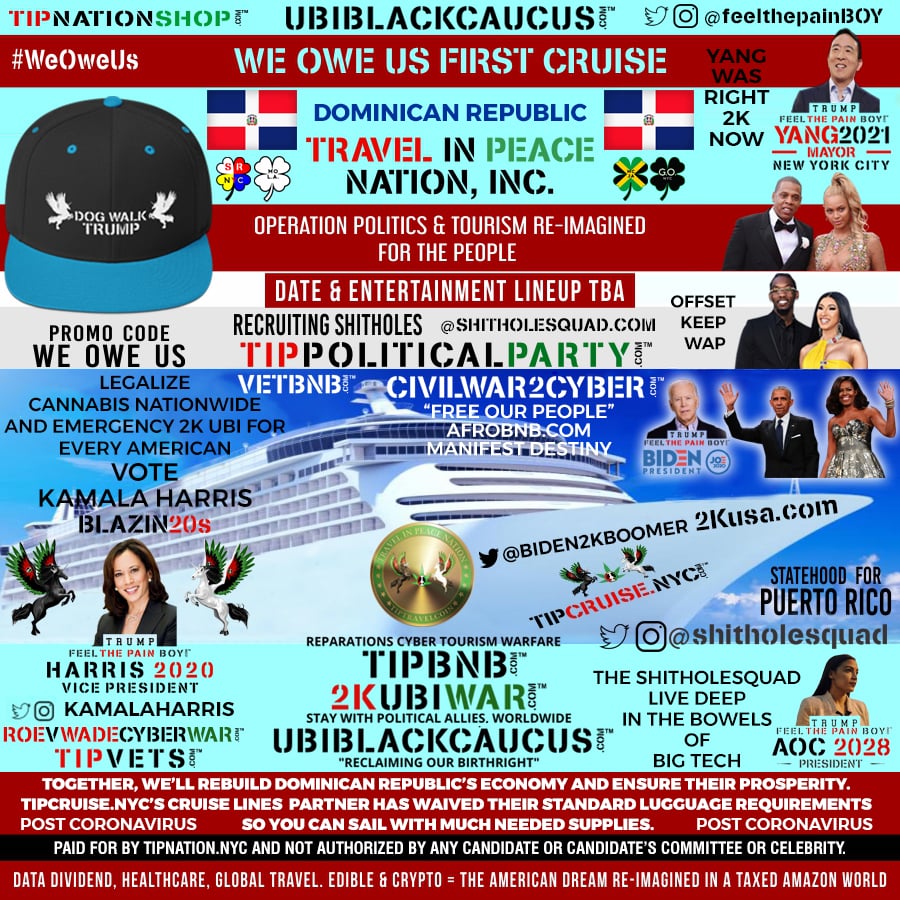 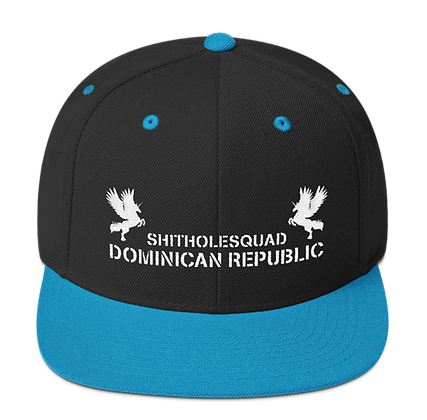 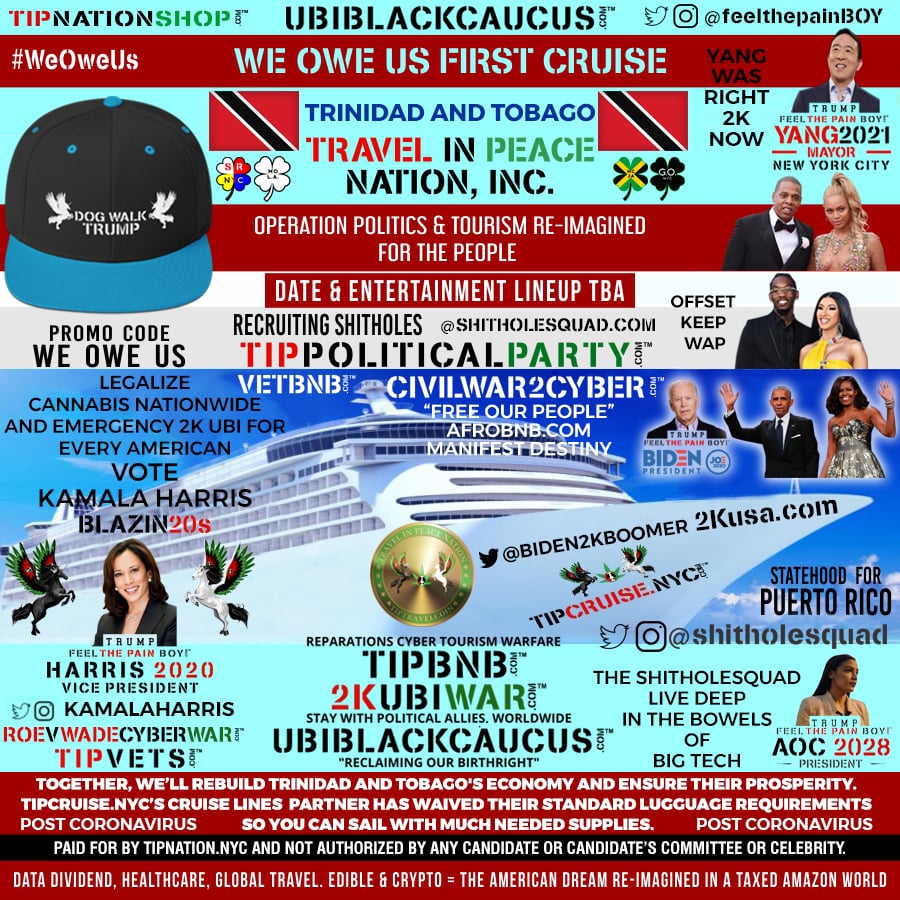 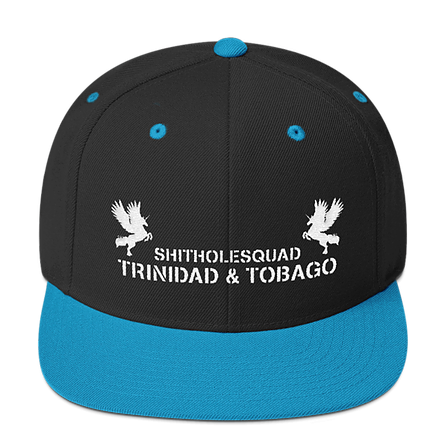 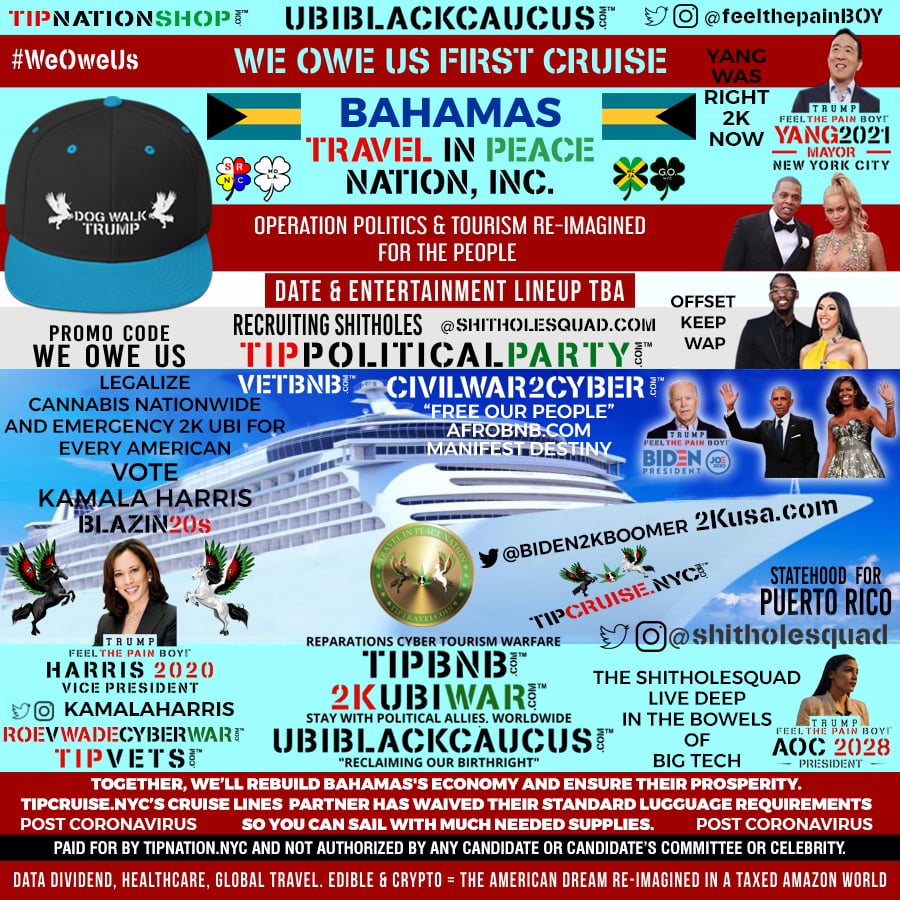